Plastic Pollution in the Ocean

Plastic Pollution in the Ocean

The Rising Tide of Plastic in the Sea 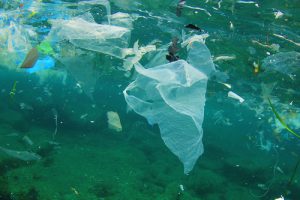 Imagine a world where there is more plastic floating around in the sea then fish. That’s the prediction from experts who say it’s a likely scenario if we don’t clean up our plastic act by 2050.

Plastic pollution in the ocean is a serious problem for our entire ocean food web and those who depend on it. The impacts of plastic on the ocean environment, wildlife, human health and economies have created a crisis we all must be aware of and take action on to save our oceans.

The Core Problem with Plastic

Plastic has become so prevalent in our society that many have called this the plastic age. There are many problems with plastic pollution, but the fundamental issue is that plastic virtually never goes away. The manufactured material is so durable because it doesn’t naturally biodegrade, it just breaks down into ever smaller and smaller pieces. This has created a plastic fog or “soup” in the ocean that is increasing every year.

At least 10 percent of the plastic produced worldwide ends up in the oceans of the world. That’s a huge amount when you consider that more than 300 tons of plastic was produced in 2014 alone.

Our ocean has a network of slow rotating currents that circulate water around the world, called gyres.  Plastic and other trash and debris accumulates in the gyres, creating garbage “patches.”

Plastic has become an unwelcome part of the diet of sea life, from fish and whales to coral, which all inadvertently consume it. Recent studies show some fish actually feed on plastic intentionally, ignoring their regular food sources.

Larger pieces of plastic debris on shore or floating in the ocean currents disrupt habitats and entangles animals and seabirds. The plastic debris outweighs zooplankton (microscopic animals that are a key link in the marine food chain) by a ratio of 36-to-1.

Even though most plastic is manufactured from petroleum, an organic substance, the manufacturing process turns petroleum into a un-natural material. The helpful organisms that normally break organic matter down cannot recognize it. Ocean waves and sunlight degrade plastic into smaller and smaller pieces, but it is not broken down into other substances the way biodegradable material is.

Plastic absorbs chemicals which are toxic to our food chain. Research in recent years has shown that plastic particles attract toxins, which gets eaten by small fish and moves ups the food chain.

Scientists are just beginning to understand in recent studies how microplastic is affecting the animals that ingest it and how it scales up the food chain. Water-borne toxins and industrial byproducts such as PCB (coolant) and PBDE (flame retardant) and other contaminants from manufacturing get absorbed in the plastic. Polyethylene and polypropylene, the most widely used plastic found in bottles, food containers, other packaging and single-use plastic bags posed the greatest risk. Despite not being toxic on their own, these plastic pieces act like sponges absorbing the toxins, in some cases over the course of many years! Other plastics such as PVC have known carcinogens of their own.

Even plankton, the tiniest creatures in our oceans, are eating microplastics and absorbing their toxins. The substance displaces nutritive algae that creatures up the food chain require. 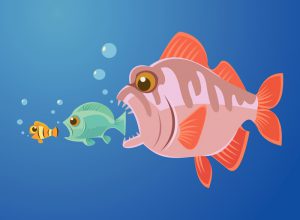 Studies confirm that these toxins harm the fish, and researchers are just starting to scratch the surface of pollution’s impacts to different marine populations. When  plastic-consuming fish are eaten by bigger fish, the dose magnifies and continues to magnify up the predator chain– a process called biomagnification.  We are the ultimate consumers of these plastic toxins! Our plastic waste is adding to our bodies’ toxic chemical burden when we (and our pets) eat  seafood , especially larger fish such as tuna.

Plastic Takes a Big Bite from Our Carbon and Monetary Budgets

Despite recycling efforts, most disposable plastic is produced from virgin fossil fuels. Overall production of plastic accounts for about 6% of global oil use.  It takes about 2 kg of oil for the raw material and energy used to produce 1 kg of polyethylene used for plastic bags, for instance. Humankind is pumping billions of tons of CO2 into the atmosphere with our disposable plastic addiction which in turn is affecting the temperature and chemistry of the ocean.

Disposable plastic use and pollution is also costing us dearly financially. The costs of recycling, coastal clean-up, the impacts on fishing, marine tourism and recreation, and the not-yet calculable impact on human health are ever increasing.

Prime Sources of Plastic in the Ocean

Most plastic is disposed on land as packaging, bottles and bags, etc. This plastic waste is littered on the coasts or makes its way down the drain and into rivers which flow into the ocean, or it drifts there in the wind. 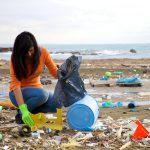 Of the Center for Marine Conservation’s “dirty dozen” items found most often on beaches worldwide, 8 of the 12 are made of or contain forms of plastic, including cigarette butts, plastic pieces, Styrofoam, food bags, caps and lids, straws and cups.

Other sources of plastic pollution are more direct, such as fishing lines and nets, or waste dumped into the sea from ships and boats accidentally or deliberately.

Microplastics have become the most insidious type of ocean invader. 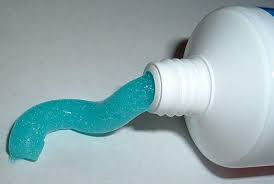 One type of microplastic that evades waste management treatment is microbeads in cosmetics and personal care products.  The microbeads became a popular ingredient to add a smooth texture in facial scrubs, toothpastes, sunscreens, lip glosses, shampoos, deodorants, and soaps. While bans have been instituted to discontinue microbead use, the bans only apply to rinse-out products such as scrubs and toothpaste. Microbeads are still allowed in products such as sunscreens and moisturizers which are left on the skin.

Another type of plastic getting washed down the drain is microfibers from washing synthetic clothing, such as fleece. A single garment made of synthetic fibers such as polyester, acrylic and nylon  can shed hundreds of thousands or even millions of tiny plastic microfibers into the wash water, and ultimately the ocean.

Certain parts of the world are contributing heavily to the ocean plastic malaise. Five Asian countries are estimated to be responsible for up to 60 percent of marine plastic , according to Stemming the Tide, a study by the Ocean Conservancy and McKinsey Center for Business and Environment: China, Indonesia, the Philippines, Thailand and Vietnam. These emerging countries are developing faster than their waste- management infrastructures can deal with the exploding use of plastic.

The amount of plastic pollution in the ocean is expected to double in the next 20 years if we don’t  change our habits both  individually and collectively.

Technological solutions, ongoing research and policies to ban harmful products are all critical to help stem the rising tide of plastic. The future of our oceans is depending on us to take action now!

What You Can Do