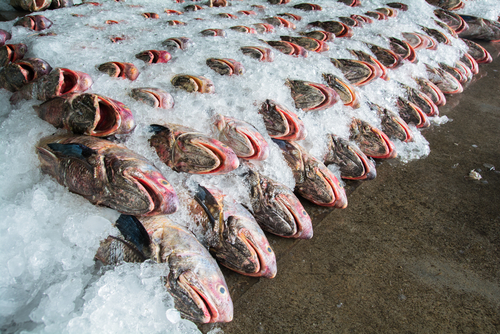 Our fisheries and all that depend on them are at risk due to overfishing.

We’re not the first set of human generations to fish certain species of ocean wildlife to the brink of extinction. But the damage we’re doing is on a much bigger scale.

For the past 50 years or so, the rich fisheries that help sustain us have yielded less year after year while become more vulnerable and sensitive to exploitation. The problem of overfishing combined with the environmental issues our oceans now face amounts to an ocean food web system in crisis.

Experts estimate that more than 80% of the world’s fisheries are either over-exploited, depleted or in a state of collapse. Large predatory fish stocks have plummeted, while overfishing may be contributing to dwindling stocks of smaller fish.  And many fishing methods themselves are unsustainable. All this boils down to two major problems: we are losing species and damaging ecosystems. We risk losing a highly valuable source of food and economic sustenance if we don’t come up with strict worldwide fishery management solutions.

Fishing Down from Oceans of Plenty

Overfishing is the process of taking fish and other wildlife from the sea faster than the species can sustain their population.

The earliest overfishing occurred in the early 1800s when we decimated the whale population for blubber for lamp oil. Some table-bound fish including Atlantic cod and herring and California’s sardines were fished to the brink of extinction by the mid-20th century.

Commercial fleets scoured the world’s oceans with sophisticated methods and technologies for harvesting and processing this profitable commodity. The upside was consumers gained access to a wide selection of affordable fish and seafood. 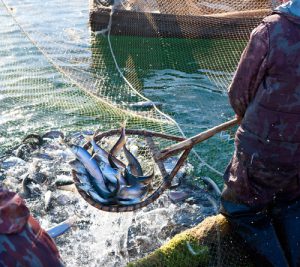 The downsides were the impact on small-scale fishing operations who depend on fishing for their survival, particularly in developing countries, and the decline and even total depletion of fisheries.

The cheap and plentiful fish frenzy peaked around 1989. The catch yields have declined steadily or stagnated since then, especially for the popular species such as Chilean sea bass and bluefin tuna, and sharks caught for shark fin soup.  Reports have estimated that industrial fishing has reduced the number of large ocean fish to just 10 percent of their population before the industrial boon. Some species such as sharks (popular for shark fin soup) are near the point of extinction

With fewer larger-fish around, the fishing industry is digging deep to stay viable – both in going deeper in the ocean and reaching further down the food chain for marketable catches. It’s been called “fishing down” and may be bringing down the ocean’s entire biologic system in the process.

It’s a common problem with any resource. When the plentiful, high demand, highly profitable supplies decline, finding and extracting new sources becomes more expensive, less profitable and more environmentally threatening (shale gas fracking is another example). Fishing down the food web goes beyond those problems due to a vicious cycle.

As fishing fleets exhaust catches of larger, predatory species, they concentrate on targeting smaller, shorter-lived prey species (like mackerel and sardines, and invertebrates such as oysters, mussels, and shrimp), which are nearer the bottom of the food chain.

The increased effort needed to catch something commercially valuable ends up exploiting marine species such as dolphins,  sea birds and sharks, as well as non-commercially viable fish species killed as by-catch and discarded (up to 80% of the catch for certain fisheries).

These actions end up depriving the few larger fish left of the food source they need to recover their populations.

Other contributors to overfishing and predator loss:

Ironically, fish farming (aquaculture) doesn’t solve the problem for fish as a food supply. In some cases, carnivorous species, like salmon or tuna, often require several pounds of wild fish to produce one pound of farmed fish.

What does the future hold?

The outlook is grim, unless we act soon to save our fisheries. A study of catch data published in 2006 in the journal Science predicted that if current fishing rates continue apace, all the world’s fisheries will have collapsed by the year 2048. Some researchers say that date may be even sooner since the data is hard to nail down and ocean acidification and pollution threats must be factored in.

There is hope. We have seen successful fish recoveries in recent decades through concerted conservation efforts, such as red snapper in the Gulf of Mexico . Many scientists say most fish populations could be restored by reassessing safe catch limits, controlling by-catch, protecting important habitats and spawning grounds, cracking down on illegal fishing, and better monitoring and enforcement.

The restoration of our fisheries also depends on us as individuals. Get educated on where your seafood comes from and how sustainably caught! Understand that we can no longer enjoy cheap, abundant wild-caught seafood without risking further collapse of the ocean food web.

We also can help by supporting policies and programs that regulate, monitor and enforce international fishing, reduce commercial subsidies and encourage sustainable catches.

Overfishing – National Geographic Just How Badly are We Overfishing the Oceans?